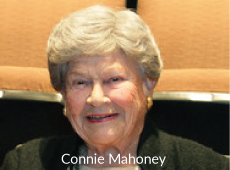 The Mahoney family has deep roots in Sonoma County, and the development of Petaluma is intertwined with their history because, from their arrival, they played an active role in their community. In 2007, Connie Mahoney was awarded the President’s Medallion for her steady support of SRJC, and the Mahoney Library’s reading room is named after Connie Mahoney to honor her tireless and generous contributions to education.

Connie Mahoney decided to dedicate herself to teaching when she was in the sixth grade; her commitment to education never wavered. Before moving to the North Bay, she was a successful teacher, who had earned her bachelors and masters degrees in education. In 1954, she arrived in Petaluma as the Supervisor for Elementary Education for Petaluma Elementary Schools. In 1996, the Petaluma Branch of the American Association of University Women nominated her for inclusion in the Book of Lives and Legacies, sponsored by National Women’s Hall of Fame in Seneca Falls, New York. Her commitment to education was matched by her husband who served tirelessly on school boards and was a founder of the Petaluma Educational Foundation.

Herold and Connie Mahoney continued this legacy of service by tirelessly contributing to their community. They supported agricultural initiatives by sponsoring projects for the 4-H club, Future Farmers, and Junior Livestock. Additionally, they encouraged young people by working with organizations including the Boy Scouts, the Sea Scouts, and the Girl Scouts; Connie Mahoney was instrumental in creating an offshoot of the Petaluma Woman’s Club to meet in the evenings. Other organizations that benefited from Connie Mahoney’s involvement include Hospice of Petaluma, the American Cancer Society, and the Petaluma Garden Club.

The Mahoneys merged their idealism with action. When they discovered a shortfall, they took swift and constructive action; when they imagined a way to better their community, they made efforts to realize that vision. Their donations of time and their endowments are aimed toward projects that are both practical and progressive. Their pragmatic philanthropy and dedication to the citizens of Petaluma helped to create a more robust and dynamic community in the North Bay.